Being There At The Birth

Being there at the birth . . . witness to the birth, the wedding vows, you become responsible. You own that baby, that marriage; you see them in a different way. Invested. Engaged. These words come to mind in regard to the February 29th launch of the new harbor Residency Program, but feel too weak.

I’ve come in late to the birth of this baby, named “Women in Combat,” working title. The actors have already been working for 6 days, and Julia Sears, the director, and Maggie Moore, dramaturg and co-creator, have been researching and collecting stories for several months, but they are thick now into the over and over questions, brainstorms, and decisions that follow and form the original impulses that led them into this room, and to what they are making.

Movement – the audible/visible heartbeat, flat hands against the chest. They are working with movement and sound, trying things. Again. Again.

No language. Or it’s a different kind of language, they are discovering. Expletives, names. What is sound? What kind of sound? What visual? What takes us there? How do you tell this story? Make it mean? Make us know something we haven’t known before.

I have always loved the simple cyc, the white curtain at the back of the stage, with its many possibilities for absorbing, reflecting light, for carrying projections—watching it ripple like water, like breath--but soft, white, sensual, I have never seen it used like this—in this moment it explodes!

Brainstorming character arcs. Jay is the scribe; they are working on his character, the throughline of Lampido, a combat medic. He says the day wiped them out. I just watch, but coming in to rehearsal I am immediately taken in, engaged in their thinking together, as they throw out ideas. Gooood listening.

Flip charts, dense with notes, hang on a ladder. Jay is making notes on another as they talk.

Everyone is so smart. 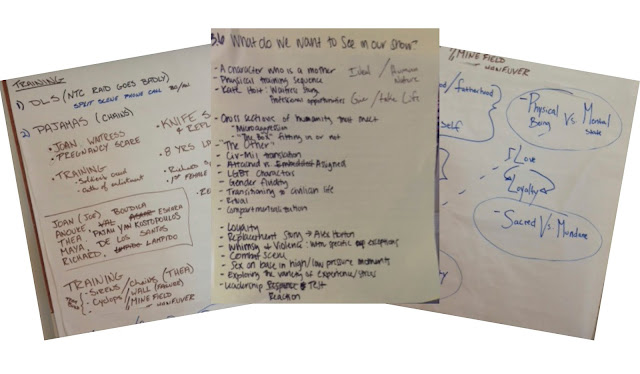 You, too, can be there at the birth. Working rehearsals are open to your considerate witnessing. You may have missed being witness to the beginning in this first Harbor Residency, but there are four more to come. Check in with the OH, and come in!
Posted by Unknown at 7:52 AM